THE General Body to Hold Press Conference Tuesday at 4 PM 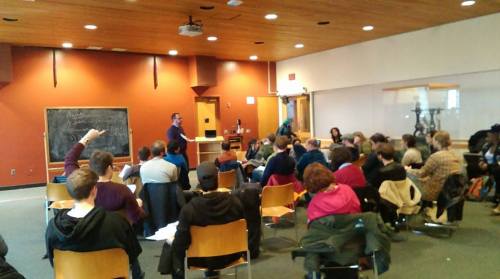 “Despite the fact that students sat in for 18 days in November, and the Chancellor’s repeated public claims that his administration is consulting with students, in fact we have had no direct contact since November 12, 2014,” said Becca Glaser,​a​n organizer with THE General Body.

Students from THE General Body have continued to organize since the sit­in ended, with some significant gains. Following a two­year student campaign and an 18­day sit­in by THE General Body last November, Syracuse University made l​ocal, ​n​ational,​ and i​nternational news this week for becoming the​ largest university in the world​ to prohibit direct investments in oil, gas, and coal companies.

“It is important for the school to connect dots between fossil fuel companies and climate change with their announcement, but we don’t want this news to divert attention from the other pressing social justice issues on campus,” said Ben Kuebrich,​a​n organizer with Divest SU and THE General Body. “We have to hold the administration accountable for its opaque, undemocratic decisions around the sudden closure of the Advocacy Center, the mandatory and expensive changes to health care for graduate student employees, broken contracts with student scholarships, and its failure to commit to supporting students with marginalized identities.”

THE General Body continues to push for financial transparency, a commitment to crucial student needs in the university’s new Fast Forward strategic plan, fiscal transparency, and holding the administration accountable to promises made during the 18­day sit­in. Students also continue to push for a timeline of action on issues including the need for sexual assault services in the wake of the closure of the campus advocacy center.